I’ve been dragging my feet about writing this article for so long. Not because fish oil isn’t awesome. It is! I’ve been procrastinating, telling myself, “Who doesn’t already know about the importance of fish oil? Everyone’s probably using it already.” In fact, the first time I wrote about it, it was 2009!

Obviously, I came around.

The reality is, you, the person reading this right now, might never have used fish oil before, and might have no clue how important it is for our health.

Or, perhaps you used it for a while, and when you ran out, you didn’t get a refill. You might have been taking fish oil for years, but you’re not using enough to make a difference. Or, you use it consistently but haven’t figured out how to convince your family or friends about why they need to take it too.

Whatever your situation, I’ve got you covered with this article.

What Are The Benefits of Fish Oil?

Fish oil is often advertised for its heart health benefits, but it does so much more than that (not that the health of your heart isn’t important). But I’m getting a little head of myself. Let’s start with a little primer on fish oil, omega-3s, and essential fatty acids, as there’s a lot of confusion out there.

You don’t need to give much thought to eating enough omega-6s. They’re prevalent in the diet. Omega-3s…not so much. However, that’s not how things have always been. Long before the days of eating beef and chicken, humans ate a lot more fish, and the average diet was much more balanced with omega-6s and omega-3s.

The imbalance with which we eat those fats today contributes to numerous health problems. But it’s not just about eating less omega-6s. We need more omega-3s in the diet than we consume each day.

Plant foods like flaxseeds, walnuts, soybean, and wheat germ do contain a pretty decent amount of omega-3s, but it isn’t the ideal type of omega-3s for humans. The omega-3 fatty acid in these plants is called alpha-linolenic acid (ALA).

Some animals easily convert ALA to eicosapentaenoic acid (EPA) and docosahexaenoic (DHA). Humans do not. And it’s DHA and EPA that provide the health benefits for which fish oil is known.

We need to consume EPA and DHA directly, either by eating fatty fish or through supplementation.

Fish oil is part of my Foundational Five, the best supplements to support health. If I had to narrow my list down to just two supplements, it would still make the cut. You’re about to find out why.

If you’re into Keto, you’ve no doubt heard people say, “eat fat and lose weight.” And while you can eat fat on Keto and drop body fat, most dietary fat doesn’t cause fat loss. It’s the removal of carbs that leads to fat loss.

However, supplementing with omega-3 fatty acids does enhance fat loss, according to research.

Animal research shows that fish oil consumption causes fat loss by stimulating the sympathetic nervous system, which releases noradrenaline. Noradrenaline stimulates brown adipose tissue, raising metabolic rate and heat production. The researchers used high-EPA fish oil at doses of up to 2.4% of the animals total calorie intake. For an adult on a 2000-calorie diet, that would equate to about 5 grams of fish oil per day.

Fish oil seems to be especially useful for reducing visceral or belly fat.

Since somebody will ask, I’ll address the fact that not all research shows fish oil affects weight loss, but it’s more a case of semantics than bad science. Some studies show that fish oil supplementation doesn’t affect body weight, while still reducing waist-to-hip ratio and visceral fat. In these studies, it’s likely that the fish oil also increased lean body mass while reducing body fat. The scale might not change significantly, but people’s body composition and health risks still do.

A small 2010 study, published in the Journal of the International Society of Sports Nutrition found the following:

Forty-four men and women supplemented with either four grams of safflower oil or four grams of fish oil. Those taking the fish oil decreased body fat and body fat percentage, increased lean body mass, and experienced a decrease in cortisol levels. Interestingly, the study participants were not instructed on diet or exercise. They were encouraged to keep their nutrition and exercise patterns the same as before the study.

That isn’t an excuse to just take fish oil and avoid exercise, but it’s still impressive that the study participants saw the changes they did without any instruction on diet or exercise.

Another reason fish oil helps with fat loss is that it causes fuel partitioning. The omega-3s help your body store more calories as glycogen (stored carbohydrate) rather than as fat.

And one final reason fish oil supports fat loss: It improves satiety. If you stay full longer, you eat less.

Though your doctor probably still focuses his or her attention on your total and LDL cholesterol levels, the more important numbers are your triglycerides and HDL.

Supplementing with omega-3s has been shown to improve insulin sensitivity, lower triglycerides, and in some studies, improve HDL cholesterol levels.

Between EPA and DHA, it’s EPA that seems to affect triglycerides the most. And it’s been shown to be effective in adults as well as children.

Fish oil supplementation was shown to lower lipids and glucose in people with nonalcoholic fatty liver disease (NAFLD) as well. Again, not surprising, since high-carbohydrate consumption, especially consumption of fructose, is the most common cause of NAFLD. Yet, it’s rarely recommended for obese patients with metabolic syndrome who also almost always have NAFLD.

Research on young and old, exercising and non-exercising adults shows that the addition of fish oil to the diet enhances strength and increases lean body mass. In older adults, it can slow the loss of lean body mass, making it a great complement to a high-protein diet, amino acid supplementation, and other muscle-building supplements.

Of the two most important omega-3s, DHA and EPA, it appears EPA has the most significant effect on protein synthesis.

In research, protein synthesis increased by 30% when fish oil was combined with a sufficient amount of protein or amino acids, compared to amino acids or protein alone! These effects have been shown in healthy young, middle-aged and older men and women.

Chronic inflammation is considered one of the leading causes of heart disease. Fish oil protects the heart by supporting healthy levels of inflammation.

In a study that used human blood samples, EPA+DHA intake changed the expression of 1040 genes and resulted in a decreased expression of genes involved in inflammatory and atherogenesis-related pathways.”

Imagine that! The habit of taking fish oil every day has a positive effect on more than 1000 genes that regulate inflammation!

Those who do a lot of chronic cardio or large amounts of endurance training should make their omega-3 supplementation a top priority as they’re more likely to experience inflammation.

Inflammation is an immune response, and fish oil not only helps support normal inflammatory levels, but it’s also been shown to support the function of white blood cells.

Not only does fish oil help with nutrient delivery to the cell, but a multivitamin may also improve the assimilation of omega-3s into the cell membrane:

Just another example of why the first two supplements for most people should be a high-quality multivitamin and fish oil.

DHA is passed from the mother to her unborn baby, and is crucial for brain development. It then affects brain function throughout life.

The effect of DHA on brain health continues throughout life. Some research indicates DHA could ward off or slow the effects of Alzheimer’s and other cognitive diseases.

In addition to the benefits mentioned above, fish oil supplementation may:

How Much Fish Oil Should You Eat or Take?

Most of the research showing the benefits mentioned above have participants taking one to two grams of EPA/DHA per day, or two to six fish oil softgels. Conservative recommendations for daily DHA and EPA intake range from one to four grams. Omega-3 softgels vary in their DHA and EPA content, but the label will show you how much is in there.

A typical salmon steak provides about one gram of EPA and DHA. Of course, most people do not eat fatty fish like wild Alaskan salmon every day, so supplementation should be a regular part of the diet.

What about the studies that say fish oil doesn’t work?

In recent years, studies have suggested that fish oil may not reduce heart disease risk as once thought. As usual, this is a result of the types of studies used. Also, these studies have only pointed at heart health, not all the other benefits mentioned above.

The other issue with many of these studies is the low dose that’s considered “using fish oil.” When just a gram of fish oil per day, especially low-quality fish oil is used, it’s unlikely to cause many positive effects.

Several years ago, my wife Vanessa was in the checkout line at the grocery store. A couple of women were in front of her. One was buying a bottle of fish oil.

The other woman saw the bottle and said, “I heard that fish oil is good for you.”

The woman holding the bottle looked at it, and then looked up at the other woman and said, “I wouldn’t know. My vet told me to get it for my dog.”

Sometimes, we take care of the nutrition needs of our pets better than we do for ourselves. Go ahead and share with your dog, but don’t miss out on the benefits of fish oil for yourself.

Leave a comment, ask a question, or see what others are talking about in the Life Time Training Facebook group.

Photo by Michele Blackwell on Unsplash 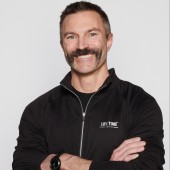 The Foundational Five | The 5 Supplements For Every Body

20% off Your Next Supplement Order

Join the VIP List and get 20% off your next Life Time supplement order of $100 or more. Copuon can be used once per customer.

Good choice! Check your inbox in the next few minutes for your welcome email and discount code.